Regional Trends and the Geographic Landscape 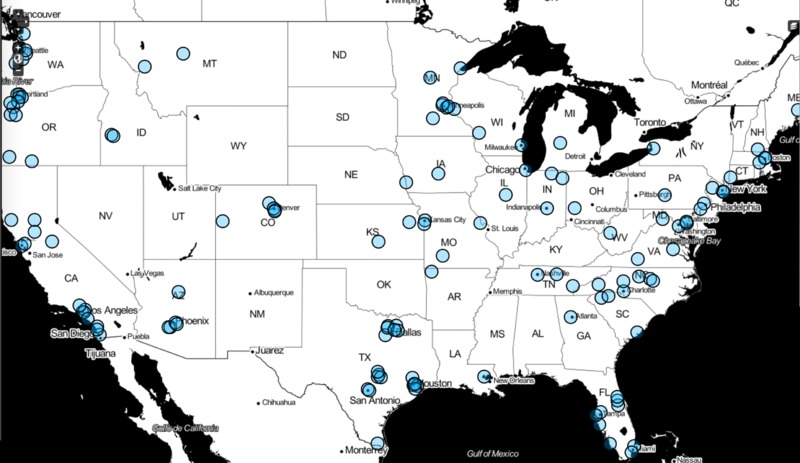 Medical resistance and regulation are important as they have regional effects. As the press reported on the opening of various schools of midwifery, they were also complicit in advertising for the regulation of midwifery. Regional differences in regulation and press are important elements as they frame the mapping portion of the project and frame our understanding of access to midwifery care today.

METHODS AND METRICS IN REGIONAL ANALYSIS

The directory of the American Association of Birth Centers provides us with information on free-standing birth centers across the country. A free-standing birth center operates independently from a hospital and typically employs multiple midwives (it may also choose to employ physicians or may be required to do so depending on state regulation). While the number of free-standing birth centers is by no means a perfect measure of access to midwifery care today, it provides a lens to understand a number of important factors. It helps us understand the independence with which the practice of midwifery may operate. While free-standing birth centers may work in partnership with a hospital, they are not required to and they do not share space and resources with hospitals. They operate, in some sense, outside of the traditional medical community. It also helps to understand the feasibility of midwifery professions and the demand for midwife assisted births. Finally, it provides an understanding of the ease with which one can practice midwifery by state, including an understanding of licensure requirements and cost to maintain a practice.

An initial analysis shows the following per capita rates by regions for Free-Standing Birth Centers as calculated by the 2015 census population estimates[1] and the American Association of Birth Centers Directory of accredited birth centers.[2]

While the regional categorizations are relatively arbitrary, they do provide a lens through which we can view a possible regional trend with a link to a history of regulatory constraints on midwifery. This data may have even more significance if narrowed down to include only the female population as opposed to both male and female, since midwives today typically serve only women.

Additionally, the following states do not currently have any free-standing birth centers:

Alabama, Kentucky, Oklahoma, Mississippi, Utah, Nevada, New Mexico, Hawaii, Rhode Island, South Dakota, North Dakota, Vermont, and Wyoming. While much of this may have to do with demand as well as population and proximity to birth centers out of state (for instance, highly populated areas in Rhode Island are close to other birth centers across state lines) many states, in particular Alabama, Kentucky, Oklahoma, and Mississippi, have shown a history of aggressive regulation for midwives as well as systematic social ostracizing of midwifery as a profession.

In 1900, twenty states had no midwifery regulations. In fact, until the 1920s, midwives in most states practiced without governmental control. Those states with midwifery regulation during this time period targeted midwives’ alleged immoral and neglectful conduct.

Once state legislation began requiring licensure for midwives, many midwives continued their practice illegally without licensure. As mentioned earlier, Grannies experienced persecution at opting not to seek licensure. While the number of midwives and midwife assisted births in the United States has steadily grown since the 1930s, those numbers are inflated by regions in which there was little negative press and little regulation (historically) of midwifery as a profession. A recent resurgence of midwifery (beginning in the 1980s) in some states has inflated the national average of midwife attended births. In reality, most states average less than 10% midwife attended births. Even so, the United States national average of midwife attended births is well below other countries where the midwife is the default form of maternity care.

See the map below for information on various states.

← Discrimination and Regional Attitudes
Regional Trends and the Geographic Landscape