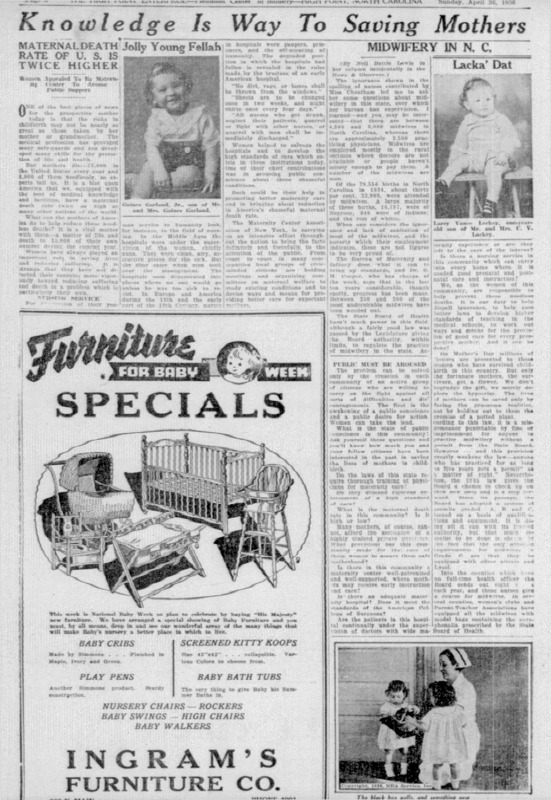 As described earlier, The Sheppard-Towner Act increased the funding and ability of states to regulate midwifery. In 1921, due to its enactment, state board of health allocations toward both public health nursing and midwifery supervision increased. Typically, states appointed public health nurses as midwifery overseers, as seen in the article on the left.  Most of the midwifery supervisors, however, had little to no training in midwifery or obstetrics and were charged only with ensuring that midwives complied with reporting regulations. The article on the left, published in The High Point Enterprise in 1936 discusses the concern about midwifery supervisors, in addition to a general concern about the number of midwife-attended births. Supervisors often acted as intermediaries between the primary medical establishment and lay caregivers.

In addition, The Sheppard-Towner Act sent public health nurses to rural communities to care for sick and pregnant patients. It is also worth noting that three states (Massachusetts, Illinois and Connecticut) did not participate in The Sheppard-Towner Act process. With the exception of Massachusetts, currently, these States have a low per capita rate of free-standing birth centers and a history of regulatory oppression of midwifery. While Massachusetts has a comparatively healthy community of midwives today, it was oppressive in banning midwifery for a long period of time (see regional map for details).

For those states that did participate, much of this work encroached on the midwife’s traditional territory and had a direct effect on the perception of the work of midwives. Just as a positive review of a new midwifery school upholds the notion that midwifery education should be regulated, the presence of a formally educated, regulated public health nurse implies that midwives too should be regulated. While The Sheppard-Towner Act increased the attention paid to maternity care, it also reinforced the view that pregnancy was a medical condition to be cared for by medical professionals, implicitly connoting that midwives were not qualified to care for the women they served.

Because states chose how to use their Sheppard-Towner authority and funding, differences in regulation varied state by state. For instance, in South Carolina, Sheppard-Towner was used to eliminate granny midwives by requiring all births to be reported (see regional map for details). By requiring reporting, the State was able to track down midwives that were not registered or known by the State (Fraser, 1998). Once these midwives could be identified, the State could require and monitor licensure and eventually force out those who were non-compliant. Many midwives were removed from their positions because they were unable to attend regularly scheduled check-ins or the continuing education eventually required by the state. Especially those without means to attend, who often lived in rural areas, became targets for state regulators and supervisors. As the number of midwives in the state decreased due to strict regulation, women would be forced to seek out professional medical assistance for their pregnancies, leading to an increase in hospital births.