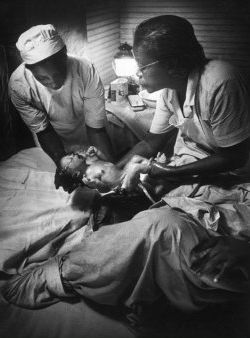 Photo of African American Midwife Maude Callen Delivering a Baby, taken by W. Eugene Smith in 1951 in South Carolina originally published in Time Magazine as part of a photo essay by Smith.

The practice of midwifery dates back to ancient times.  The midwife, traditionally a woman, worked behind the scenes and in private. However, during the Middle Ages the midwife began to be seen as a more public figure. Families merged and grew into small communities where the midwife was recognized as the sole public health service in the town. While little is known about midwifery in the British colonies in North America, there is some evidence pointing to the interference of men in the birthing chamber. This began in the early 1600s with evidence growing in the 1800s as information regarding hygiene and sanitation became widely available. Presently, the midwife is typically available to attend only those who can pay her in accordance with her skill. This transition of the midwife from a public healthcare worker who visited and attended all births to one who is primarily chosen to attend births of upper-middle class women is a relatively new development. I argue that this has occurred because of discriminatory regional attitudes and targeted racial state regulations that developed around the turn of the century.

Access to a midwife today is in part a matter of geographic location. This condition stems from a long history of regulation and racial and class discrimination from the medical community that has been reinforced by media representations of midwives. Regulations, economic factors, and a lack of knowledge about the practice and philosophical beliefs of midwifery either limit access to midwifery as a delivery option or lead many women to choose to deliver in a hospital. While midwives in the 19th century attended nearly eighty percent of all births in the United States, they now attend only nine percent.[1]

Reports in the media across the United States from the 1900s to the 1940s show that certain regions and states have historically displayed negative attitudes, often due to class and race representations, toward midwifery as a profession. Those states also have stricter regulation and higher barriers to entry for midwives, factors that affect the number of midwives and availability of midwifery care today. Many of these racial and class motivated regulations, used to historically protect the medical community, have impacted the present state of midwifery,  impeding its growth as a profession and accesibility of midwifery care to the general public.

In Europe in the Middle Ages the midwife visited the rich and poor and by the 17th century became recognized as a healing figure in many towns. She not only visited women, but also men and children, acting as a town healer and was regarded with high esteem. Typically, medical and government institutions imposed little regulation and/or supervision. Without a mechanism for birth control, women had multiple pregnancies requiring the repeated services of midwives. Midwives were women in the community who themselves had had birthed multiple children. Their own births became the main source of their expertise. Men were typically excluded from childbirth as it was considered immodest which interfered with their ability to regulate. They had little information about what a healthy birth entailed.[2]

Whereas midwifery has traditionally viewed childbirth as a natural experience, physicians consider pregnancy a medical condition. As the medical profession became larger and more organized during the 18th century, these conflicting stances on childbirth increasingly came into opposition.  Despite various acts of resistance by woman against allowing men into the birthing chamber, male doctors began to make their presence known at childbirth. In A Midwife’s Tale: The Life of Martha Ballard, Laurel Ulrich details one of the earliest accounts of such increased male presence as found in the journal of Martha Ballard, a midwife in the United States in the 1700s. Ulrich discovered that Ballard writes with increasing frequency about the visits of Dr. Benjamin Page, a doctor determined to involve himself in the practice of obstetrics.[3] Ulrich notes that most physicians, upon being called to an emergency birth deferred to the midwife’s expertise. However, Dr. Page arrived, often to normal births, and did not consult the midwives, who had often been staying with the woman for days. From Ballard’s diary, Ulrich notes that Page was quick to give women opium for pain, often stalling their labor and causing nausea and chills. Ballard also writes about other male physicians intervening in normal labor, and notes that women were “intimidated” by the pain of birth and called physicians if they could afford the fee.  This example, from the late 1700s shows the inclination of medical personnel (mostly male) to intervene in the traditional midwifery practice.  This intervention escalated as the medical sciences became more prominent. As the medical professions functioned according to state regulation and regional attitudes, the amount of involvement from the medical community varied at the state and regional levels

Brought to the Forefront

While there was some intervention by physicians not much occurred in the way of regulation or media representations of the practice until the late 1800s. Many physicians in the 1800s did not approve of midwifery, but others valued the presence of midwives and often trained midwives themselves. Starting in the early twentieth century, midwifery gained increasing attention as a profession, albeit mostly in a negative light. As medical education became more formalized, many were determined to require that midwives be formally trained. The issue did not reach national attention until the early 1900s because obstetrics as a practice was less formalized than other specialties. As medical hierarchies formalized and doctors moved from the home to the hospital, it became difficult for physicians to obtain experience in obstetrics, since pregnant women tended to deliver in the home and physicians increasingly made home visits only for those willing to pay a high price (Thompson, 2015).

As state officials began collecting more data on infant mortality, the midwife was brought into the forefront of American politics and culture. Although the infant mortality rate for midwife attended births was not significantly different than physician attended births (in fact, some studies suggest it was marginally better) midwives became the target of regulation in the name of increasing infant mortality and protecting mothers. [4]

Negative attitudes toward African-American and immigrant midwives became widespread, and increased fear and concern for the preservation of the American way of life. Women were seen by male physicians as impressionable, and pregnant women as even more vulnerable. Such vulnerability began to be viewed as a condition or symptom pregnancy; intervention was seen as needed to protect women from their vulnerability.

This project will show the impact of negative regional attitudes on access to care and the growth and viability of midwifery as a profession in the United States. It uses newspaper articles from the 1900s (specifically 1900-1940), State Board of Health Reports, and published presentations from various organizations such as the American Gynecological Society. I have incorporated mapping of the reports and regional and state case studies to show regional differences in approaches to midwifery regulation. I also use data from the American Association of Birth Centers (directory) to show the availability of midwives today along with Census data.

[4] Ralph Waldo Lobenstine, “The Influence of the Midwife upon Infant and Maternal Morbility and Mortality,” American Journal of Obstetrics and the Diseses of Women and Children 63 (1911): 876-880. Paper read before the New York Academy of Medicine, February 23, 1911.