The Economics of Childbirth

In rural communities in dire need of healthcare, the midwife initially functioned as not only a birth attendant,  but also as a primary healthcare provider. However, with the introduction of public health nursing (and its rise after the Sheppard-Towner Act was passed), the need for midwives to provide non-birth related healthcare was diminished. Public health nursing, especially prominent in the South, also began to take the place of the community outreach that midwives had previously provided. But the impact of public health nurses was restricted by regulations that strictly directed what they could do and limited their numbers. Nurses were also limited in their reach since they were typically lived in more urban areas and needed to be bused in to rural and low-income area. Unlike the classic, local “granny” midwife (see definition), these nurses did not live in the areas where they were serving, and were unable to provide round-the-clock care. 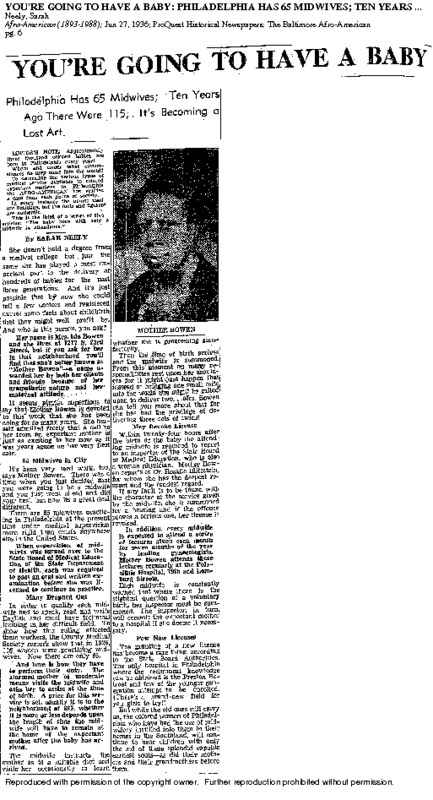 In a first-hand account of changes in midwifery, Sarah Neely records the thoughts of Ida Bowen, a midwife in Philadelphia (see right). Bowen describes the ease with which women became midwives before regulation, “There was a time when you just decided that you were going to be a midwife and you just went ahead and did your best, but now it’s a great deal different.” Neely further notes that these regulations greatly decreased the number of midwives. For instance, the city of Philadelphia saw a steep decline from 115 midwives in 1926, to only 65 by 1936 as reported in the article published in The Afro-American in 1936.

Prior to regulation most midwives did not have any formal training, but rather had a wealth of on-the-job experience. New requirements meant that they had to be able read and write in English as well as have specific technical training in the field which differed by state but could include passing an examination, training in identifying infection, anatomy courses, and knowledge of the midwife’s limitations. Often the training also included attendance at continuing education courses throughout the remainder of her career. This was particularly difficult for many rural midwives who did not have the means to attend courses located in urban areas or pay continuing fees for their education.

Granny midwifery, a type of lay midwifery (explained here), was typically categorized as attendance to home births by those with extensive informal training in obstetrics. Most granny midwives in the 1900s were African-American women whose skills were past down from generation to generation; they attended poor rural women, both black and white throughout the Deep South (Mitford, 1992: 173).[1]These midwives often began working on plantations, and then expanded into other areas of the community. As they expanded into urban areas near hospitals, physicians grew to see them as a threat.

Attitudes toward midwifery differed by region, not only with regard to the training and education of midwifery, but also with regard to the future of the profession. In particular, finding a substitute for the rural midwife was difficult in more sparsely populated areas. In the North, efforts were focused on training and regulation for the future professionalization of the midwife. However, in the South doctors wished to eliminate the role of the midwife as comprehensively as possible with the understanding that midwifery could not never be eliminated completely.

Recognizing that many physicians did not have adequate training in obstetrics, many medical professionals became advocates of medical dispensaries to which poor women could give birth for a low fee. These low-cost dispensaries competed with midwives, who charged approximately half of the fee otherwise charged by an obstetrician, while at the same time training more physicians in obstetrics. In the article seen above published in The Chicago Daily Tribune in 1913, the reporter describes the benefit of lying-in hospitals, saying, "The lying-in hospital and dispensary plan is a workable alternative proposition [to the midwife]. When put on a paying basis, with the cost to the man no greater than that of the midwifery service, the women will flock to it in droves, and the vexed midwifery problem will have found its solution."

Dispensaries not only reduced the economic viability of midwives, they also made low-income women training subjects for physicians with less experience than the average midwife. In addition, low-income women birthing in dispensaries were often subject to unnecessary intervention, which was at times harmful. For instance, at Sloane Maternity Hospital in New York, women received enemas of bichloride of mecury upon admittance, had their heads washed with kerosene and ammonia, and charity patients in particular had their pubic hair shaved because of fear that it harbored more germs. Regardless of such measures, Sloane suffered an epidemic that killed 15% of its patients in 1927.[2] Furthermore, the fees earned and experience gained by the obstetricians in treating low income women enabled those obstetricians to attend wealthier women in their homes.

However, Southern obstetricians acknowledged that they were not solely concerned with the economic threat, but also concerned with their status as physicians within the larger medical profession. As one Southern physician remarked, “In the South we have to deal with the ignorant and superstitious negro.” He posited that in the Northeast midwives were “either foreign or of foreign parentage and a fair percentage of them have been trained in Europe or at the school [Bellevue] in New York.” [3] 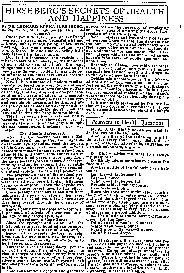 Because most midwives in the South were Black, the image of the midwife as dirty, unprofessional, untidy, and uneducated was associated in particular, with Black midwives (Ladd-Taylor, 1988). Class divisions grew within the Black community itself, and many middle-class black women began to push for women to seek out the care of physicians. In choosing a midwife, many middle-class black women felt that they would be portrayed as uneducated themselves.[4]

For many physicians in rural areas, the immigrant midwife was more desirable in comparison to the Black midwife. The immigrant midwife could be educated and sought out the American way of life. She could learn the American medical hierarchy and be controlled by physicians in a way that the Black midwife could not. In an article published in The Montgomery Advertiser in 1909 (seen left), one physician described, “Due to the ignorance, the tradition, a mistaken sort of modesty, or the influence of some old women, who think the way things “used to be done” is as good as the new scientific way, a midwife was allowed to officiate at the natal ceremonies.” Black midwives were seen as uneducated and unwilling to change, while immigrant midwives, immersed in a new culture may have been more malleable. 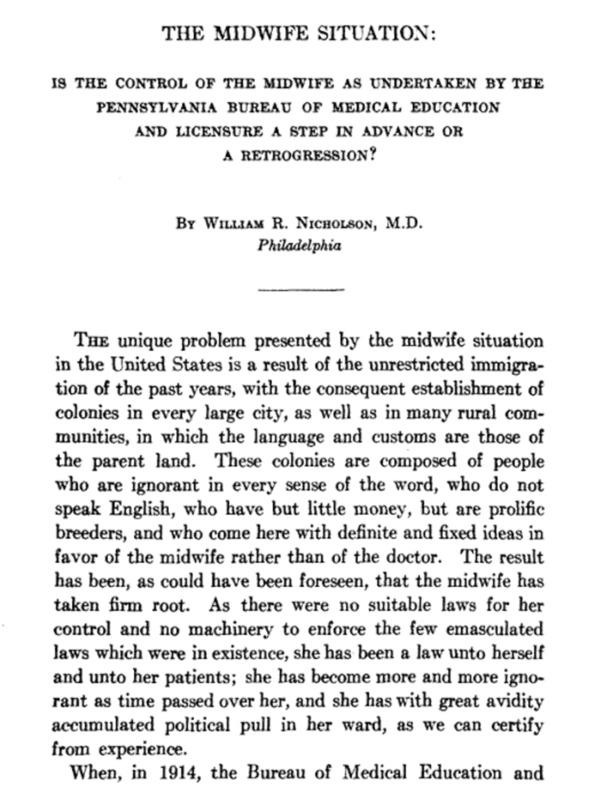 However as time passed and immigration grew, many physicians in urban areas began to grow more concerned with immigrant midwives than African-American midwives. Immigrant midwives posed not only an economic threat, as African American midwives did in the South, but they were also viewed as a threat to the American way of life. Immigrant midwives were framed as intruders, brainwashing poor and uneducated American women with their way of life. In Philadelphia, one physician argued that the midwife problem was in fact due to the wave of “unrestricted immigration of the past years, with the consequent establishment of colonies in every large city, as well as many in rural communities” (see right). His characterization of immigrant midwives as “ignorant in every sense of the word, who do not speak English, who have but little money, but are prolific breeders, and who come here with definite and fixed ideas in favor of the midwife rather than the doctor,” sheds light on the different sort of discrimination midwives faced in urban areas.[5] Immigration brought women to cities, often filtering through Northern port cities such as New York City, which resulted in differing attitudes in the North and South toward Black woman and immigrant women. Many immigrant women would have also had access to education in their home country and arrived in the United States with more knowledge than did Black woman, who either arrived as slaves or were born to slaves on plantations.

A midwife in the rural South would be largely discriminated against for her race and lack of education, however in Northern cities she would face persecution due to her nationality and lack of a formal American education. Both ultimately culminated in a feeling of disrespect for the medical community.