Midwives were often subject to intense racial and ethnic discrimination which often depended on regional attitudes. Midwives in the South were scrutinized for their lack of education, hygiene, and often general demographic attributes, and midwives in the North were discriminated against because of their nationality. In the timeframe from 1900-1940, a general distrust grew with regard to the practice of the untrained midwife, and they were often regarded by those in the medical community as perpetuating unsafe and unproven practices.  This was only the start of the discrimination faced by informally educated midwives in the North and South. However, in the West, midwives faced little persecution and discrimination before World War II.

In the South, attitudes of eventual abolishment of midwifery permeated whereas the North was more concerned with training and quality of care. Depending on geographic location, midwives faced different obstacle imposed by targeted legislation. Physician claims that rising infant mortality and maternal mortality rates were due to midwife attended birth increased. While there was no hard data to bolster such claims, government officials began enacting legislation designed both to limit the practice of midwifery as well as eliminate it in many cases.

Poverty, geographic location, and language barriers kept Southern midwives isolated from one another, ultimately contributing to the disorganization within the field for the first half of the 20th century.

Because granny midwives were particularly common in Southern states, (Mathews, 1992; Savitt, 1978; Auerbach, 1968; Logan, 1989) increased negative social sentiment in those areas ultimately impacted access to midwifery. Even though there has been a recent resurgence of midwifery there are still significant regional disparities. The American Association of Birth Centers’ directory of accredited free-standing birth centers in the U.S. shows that as a result of racially motivated regulation intended to restrict the practice of African-American midwives no birth centers have been established in Mississippi and Alabama and only a few have been established in Arkansas, South Carolina, and Louisiana.[1]

Given the history of racial discrimination it is not surprising that there are a significant number of derogatory reports with regard to midwives in the South during the 1900-1930s and far fewer reports from the Northeast and West Coast.

The map below shows reports and transcripts across the United States.

For example, an article from 1917 in The Montgomery Advertiser (seen on the left), reported that a doctor sued a midwife for practicing while stricken with Pellagra, a disease related to poor nutrition. The midwife claimed that the doctor spread untrue rumors that she was affected by the disease, and these rumors, amounting to slander, ruined her practice. Accusations such as this directly fueled the medical community’s pursuit of midwifery regulation, by further framing midwives as uneducated and low-class, thereby affecting the number of midwives and the access of women to such services.

Shortly after the case mentioned above, a group of Alabama doctors convened and set out to determine the future of midwifery regulation in Alabama. An additional article seen on the right was published in The Montgomery Advertiser and reports on physicians being increasingly supportive of regulation.

In the South, circulars were also distributed by public health lobbyists, physicians, and supporters campaigning against the granny midwife, not only Black, but immigrant as well.  These circulars portrayed granny midwives as unkempt and uneducated, ultimately a danger to the public (see for explanation about granny midwives). Since their “likenesses [were] distorted and placed on circulars…grannies had to fight their own bodily representations in a society where only females who were delicate enough to require hospitalization were constructed as women” (Susie, 1996: 3). This served not only as racial persecution, but as sexist persecution.

Granny midwives were of particular importantance in the antebellum South, as former slaves had little to no access to medical care. As one of the only sources of medical care for slaves, they were an important part of the lives of African-American women in the South, and demand for them continued well after emancipation. However, around the turn of the century their approaches to healing were condemned, and they were sometimes even labeled as “hags” (Susie, 1996). Initially, racism and economic factors actually bolstered acceptance of Black midwives in the South. Many medical professionals refused to see Black women, and instead chose to train granny midwives in the way of Christian morals and the importance of cleanliness (Holmes, 1992: 258). This enabled granny midwives to serve their communities.

Although some physicians embraced midwives, media reports attacked Black midwives, blaming them for their ignorance, unsanitary habits, and infant mortality. County health departments implemented midwife supervisors (with money from Sheppard-Towner) that transferred power away from communal structures and toward government entities. Those midwives who were unwilling to comply with such procedures (birth registration, licensure, and continuing education) became targets for persecution and eventual loss of licensure. Holmes mentions, “senior midwives were targeted for replacement by new recruits willing to accept the health departments’ dictated standards for midwifery practice” (Holmes, 1992: 258-9). Ultimately, the South became a hotbed of midwife persecution, and the impact of that persecution can be seen in continuing limited access to midwifery today.

On the West Coast, a great number of midwives were Japanese immigrants, primarily attending to Japanese and Chinese mothers. Unlike in the East and the South, there was little regulation and little concern about Japanese immigrant midwives. States such as Washington, Oregon, and California did not view the midwife as having any negative impact on the West Coast, largely because Japanese immigrants often came to the United States with more education. While regulations requiring midwives to register were made, there was no attempt to control or supervise them (Smith, 1997). In the West, midwives were not viewed as a threat to American values. Unlike attitudes towards midwives in the South, on the West Coast midwives were viewed as valuable since they filled a gap in the medical field and attended to rural communities that doctors were unable to serve. Additionally, because Japanese women tended to stay within their own community, they brought over communal foundations from Japan in forming midwifery associations. Unlike midwives in the South, who were dispersed and unconnected to communities larger than their towns, midwives on the Pacific Coast created networks to communicate and resist any harmful regulation (Smith, 2005). Similarly in Hawaii, Japanese midwives were not viewed as part of the “midwife problem.” While they were regulated and supervised, they were allowed to practice with little government interference. 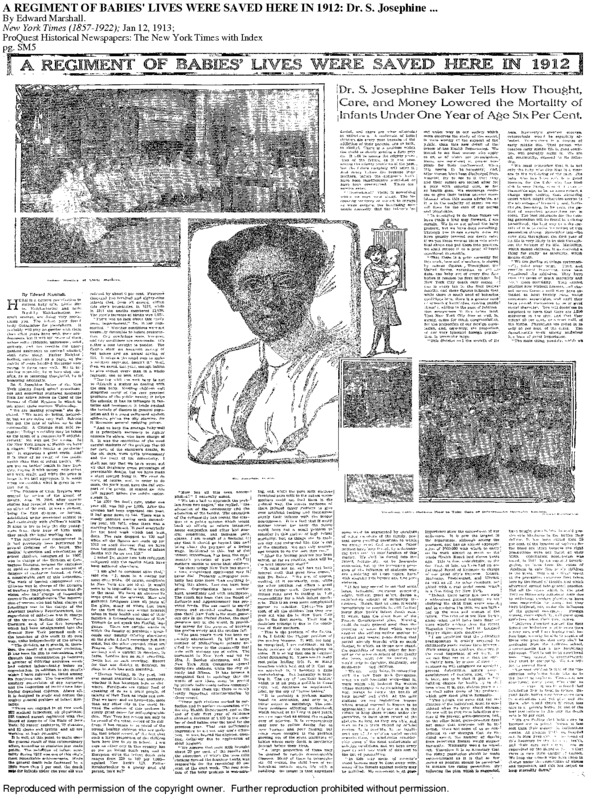 As in the South, in the North physicians advocated for intensive medical education and stricter licensing laws for midwives (Weitz and Sullivan, 1992: 246). But, in addition to this social attacks were made against midwives who ultimately, due to both their socioeconomic status and their dispersed nature could not form such coalitions as had the medical and legislative communities.

In urban areas, the opening of midwifery schools began the push to educate midwives. Dr. S. Josephine Baker is widely regarded as the figure most involved in midwifery reform in New York. Baker, the director of the New York City Bureau of Child Hygiene helped to establish the Bellevue School for Midwives in 1911 (see left for an article about the school). Though Baker intended to increase midwifery education and decrease infant mortality rates (although, rates were no higher for midwives than for physician attended births) many midwives were ultimately denied licensure and were unable to practice.[2] Under Baker’s leadership midwife attended births decreased from 40% in 1908 to 27% in 1920 as many midwives were denied licensure or found that there was not enough demand for their services as access to hospital births increased.[3]

While many attribute the decrease in infant deaths to be a part of this, it was largely a result of parenting education courses for new mothers (Litoff, 1978). The opening of the Bellevue School for Midwives was intended, not only to combat the lack of perceived training of the immigrant midwife, but also to imbue immigrant midwives with American values and understanding of the American medical hierarchy. By doing so, physicians could control the work of the midwife and educate the midwife on available medical options.

While the opening of schools such as the Bellevue School was widely praised, it served to indoctrinate the midwife in the ways of the medical industry and helped facilitate the absorption of midwifery into the medical hierarchy controlled by physicians. Nevertheless, such attitudes toward training midwives may have ultimately enabled the continuation of the practice. Currently, the Northeast has one of the highest rates of midwifery attended births of any region and an average number of free-standing birth centers per capita. The intent of the medical community to train and educate midwives, may have saved midwifery as a profession in the Northeast. Though there were significant negative attitudes toward midwives in the North, as seen in the above articles, the approach produced a different result from that in the Southern states.  Education created a platform for midwifery to professionalize and resist complete abolishment.